Over at SimTrek (forum is gone now), Dominie wanted ears for her Vulcans – proper Vulcan ears, thank you very much, that angle forward like Spock’s. My Vulcan Sims and I thought this sounded logical, so I took her up on it. 🙂

And here they are: Vulcan ears for both genders and all ages. You will find them under Accessories – yes, that’s even for toddlers. They stay on at all times and can of course be worn together with other accessories. 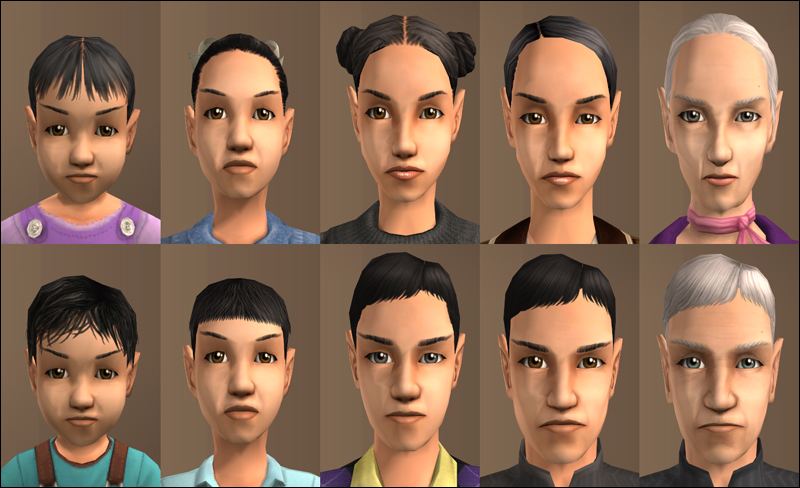 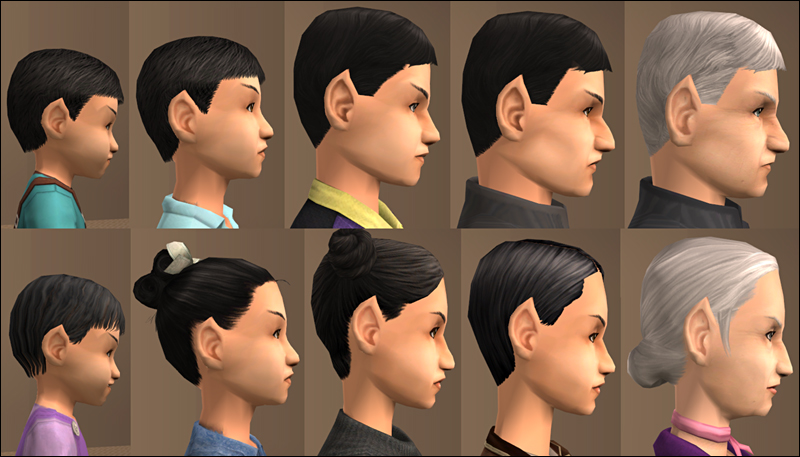 Note: In the screenshots above, the ears for TM aren’t quite seamless. This happens only for TM and only with skintones where the faces for TM and AM are shaded differently, such as the pictured Maxis S1 skintone. For all other skintones, the TM ears are just as seamless as the others.

Now, as you probably know, there are 27 Maxis face templates. Some are narrow. Some are wide. Some have small ears. Some have big ears. Some are jug-eared. The only way to make ears that look perfect with 27 different face templates, is to make 27 different ears – and I’m sorry, but that won’t happen until the sun rises in the west and sets in the east, the seas go dry and mountains blow in the wind like leaves. 😦 So while these ears will work for most Maxis face templates, they won’t work for all. They won’t completely cover the ears on the most jug-eared face templates, and they also won’t cover the Maxis elf ears. Also, with some faces there will be some clipping at the ear lobe, but this is really only noticeable if you zoom in closely and straight from the side.

Well, enough about that. Of course, Dominie wanted some recols for her Vulcan ears, and SimTrek’s resident Vulcan expert CarenRose wanted some, too. While I was at it, I threw in some recols for my own favourite skins as well. So, you’ll have ear recolours for no less than 47 (I swear that wasn’t intentional!) different skintones. 😀

We’ll start with the basics (that nobody asked for, but that I did anyway): recolours for three of the Maxis skintones:

Then we have the recols that Dominie wanted for her skintones:

After that, we have the recols for CarenRose (actually, she didn’t request the Louis skintones, but I thought she should have them anyway since I know she’s used them as a base for her own Vulcan skin): 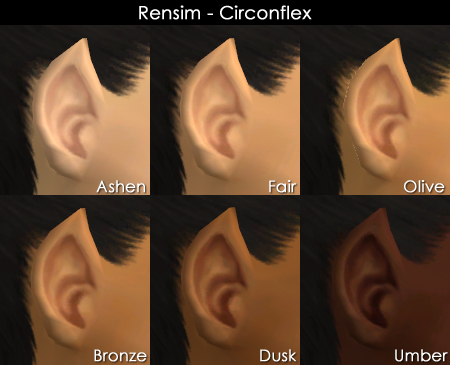 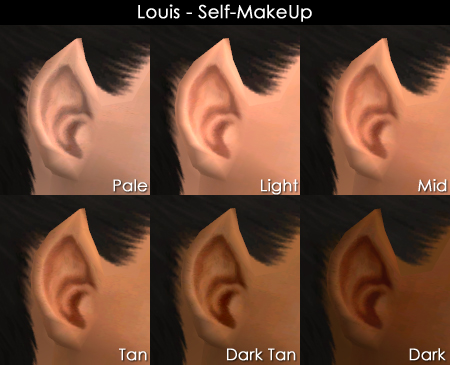 And finally, we have the recols I made for some of the skintones I like to use for Vulcans myself:

The ears are mapped just like normal Sim ears, so if you want to recolour them you can use the face of your skintone of choice straight up, without any edits. That’s the good news.

The bad news is that the recolouring process is slightly more complicated than it is for normal accessories. First of all, you’ll have to recolour the ears twice, once for female Sims and once for male ones. This isn’t just because I like to make your life difficult, but because on some skintones, the faces for male and female are shaded differently. Therefore, the ears can’t use the same texture for both genders like glasses do – then they’d look good on one gender, but not on the other. So, you make one recol for the gents and one for the ladies.

Second, when you look at your Bodyshop project files, you’ll see that you have three texture files (unlike for a pair of glasses, that would only have one): body, frame and top.

You have to update all three textures for the ears to display correctly! It is not enough only to update the texture for the ears your mannequin is wearing, even though that’s the only one you see in Bodyshop.

Usually I don’t like to subfolder my files, but given the amount of recols I’ve made an exception this time. In the .zip file, the recolours are all in subfolders named for the creator of the skintone. That way, if you don’t want/need recols for a particular skintone, you can just delete that folder – but whatever you do, do NOT delete the folder called “MESH”. This folder contains the mesh (who would have thought? 😉 ), so if you delete it your Vulcans will just be wearing strangely coloured glasses.

13 thoughts on “Vulcan Ears for All Ages”