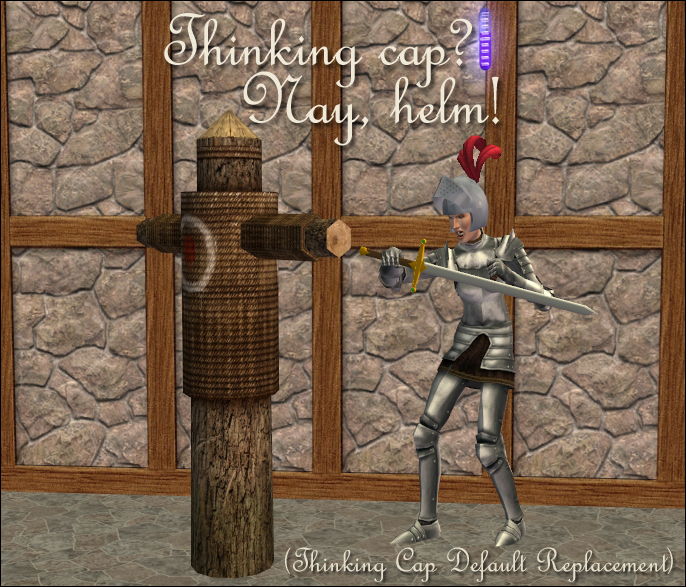 This is all George R. R. Martin’s fault. 😛 I’m currently re-reading A Song of Ice and Fire, and suddenly I realised I had to do something about the thinking caps in my Westeros ‘hood (that resides in an AnyGame that otherwise has been default replaced within an inch of its life). I mean, a lightbulb, really? A lightbulb?? Gods be good!

So I made some lightbulb-free default replacements.

If you have OFB, this probably looks familiar. It is indeed the OFB knight’s open helmet, only I’ve turned it into a halfhelm so that Sims can put it on and take it off without the help of a squire and/or blacksmith. Also, even though the night is dark and full of terrors, because the helm has a plume and not a lightbulb, it doesn’t glow (which also means you can’t tell how many more uses it has), since glowing plumes wouldn’t make sense. However, if and when the helm burns out because your Sims tried to wear it when they shouldn’t (Edmure, I’m looking at you), there will still be sparks and smoke. Which admittedly doesn’t make any more sense than glowing plumes, but if I had taken that out your Sims would be holding their noses at and try to whisk away… absolutely nothing, and that would just look silly. So there will still be anachronistic sparks.

As with the OFB knight’s helmet, there are four shiny variations of the Thinking Helm:

And just in case your Sims are more of the hedge knight kind (or if they simply don’t want to spend their time polishing thinking helms), I’ve also added a more scratched and scuffed variation:

You can only have one helm in your game at a time! If you want to use a different colour Thinking Helm (or somebody else’s default replacement for it, for that matter), you must delete the one you are currently using from your Downloads folder first.