(Yes, I know that’s not how you spell “extraordinary.” It’s a pun.)

And things like this would be why I said I’m “sort of” on hiatus. 😛

Over at MTS, the great Michelle made some wonderful LACK recols of the base-game “Get Up!” alarm clock. Well, sort of. This clock turned out not to be recolourable, so Michelle had to make a brand new, CC one in order to be able to recolour it. I loved her recols, of course, but I thought it was a real pity she had to go through all that trouble, and that someone really ought to make that poor, neglected alarm clock a CEP extra for future use. Then I thought that “someone” might as well be me. 😉

So, here is a CEP-extra for the base-game cheap alarm clock. Now it’s recolourable, and it also has two subsets instead of just the one.

Now the bells and the legs are one subset, whilst the body of the clock is another. Like so:

Now, I’d be a poor modder if I didn’t test my stuff before offering it up for public consumption, so of course I had to make some recolours to see that my new CEP worked as advertised. 30 of them, to be exact, in Anna’s new colours (actions courtesy of HafiseAzale – thank you for that!). I also made four recolours for the bells/legs. You know, just because I could. 🙂

But that’s not all! Kind simmer that she is, Michelle let me use her textures to make LACK recols for this clock as well. Thank you, Michelle! ❤ 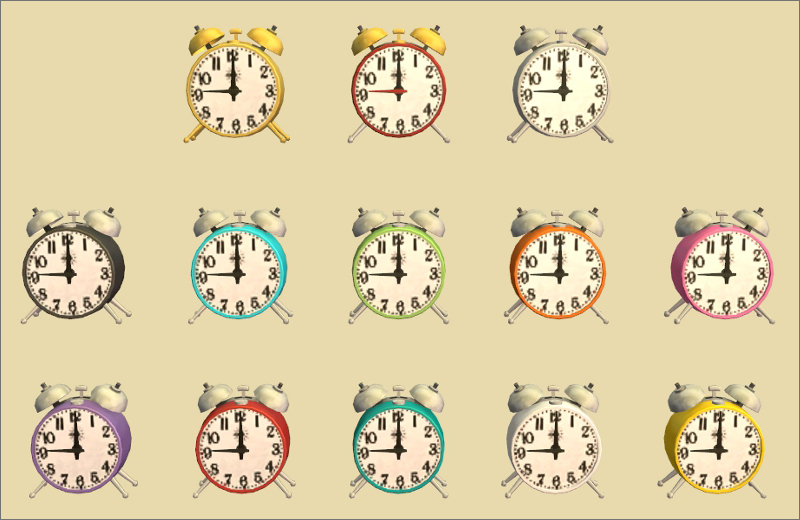 Picture by Michelle @ MTS, slightly edited for size by me.

If you don’t have them already, please install the CEP and the Extras by Numenor first!

You’ll find two subfolders in the zip file below, Documents and ProgramFiles.

Do NOT put them in your Downloads folder, and do not put both in the same folder. They won’t work properly if you do.

12 thoughts on “CEP Extra for the BG Cheap Alarm Clock”