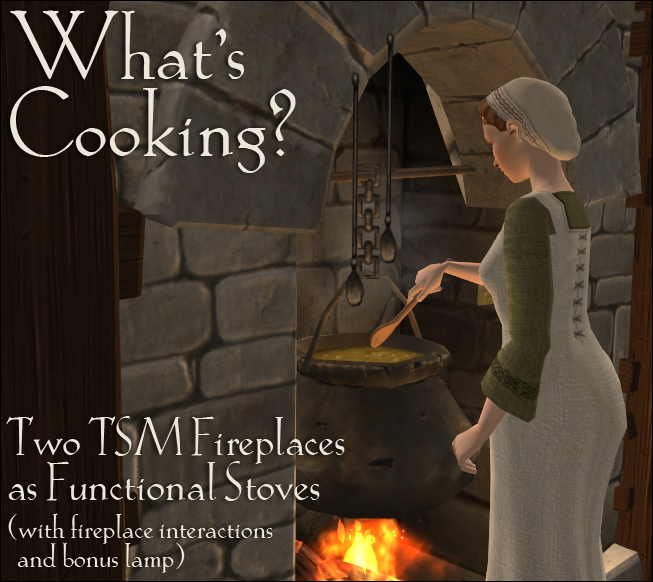 We won’t be getting a white Christmas in this part of the country (but since we had a veritable Fimbulwinter last year, I for one am perfectly fine with that), but that doesn’t mean the weather outside isn’t frightful in my game. Winter is coming and the night is dark and full of turnips; my medievalish Sims obviously need something to help keep them warm, and maybe something to nibble on as well.

So, I took two of the straight fireplaces from TSM – the Phireplace Pharmadasi and the Jacoban Fireplace – and converted them into functional cooking stoves. You need to have at least one EP installed for them to work, but it doesn’t matter which one, it can be anything between UNI and AL.

The Phireplace Pharmadasi you can predictably find in Appliances -> Cooking, for $650. It has 1900 polys, but that’s on three tiles so it sounds worse than it is. 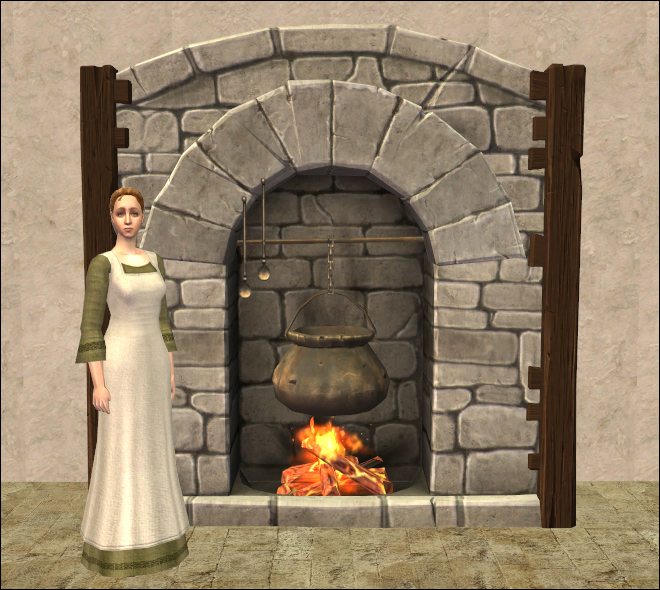 Helping us with the demonstration today is Cook, a.k.a Mistress Bethany Tanner, a.k.a. the true lord of the castle,
and she has better things to do than participate in this nonsense, thank you very much!

The wood part comes in eight of Pooklet’s naturals. And no, in case you are wondering there’s not really a pattern to the colours I’ve chosen, I just went with the ones I liked the best. 🙂 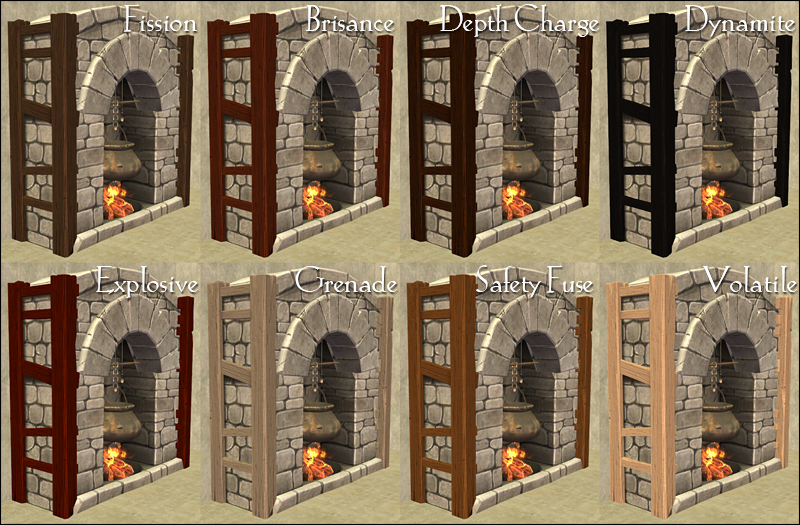 Fireplace stove No. 2 is the Jacoban Fireplace for $1450, also found in Appliances -> Cooking. 3500 polys; again on three tiles but still in the 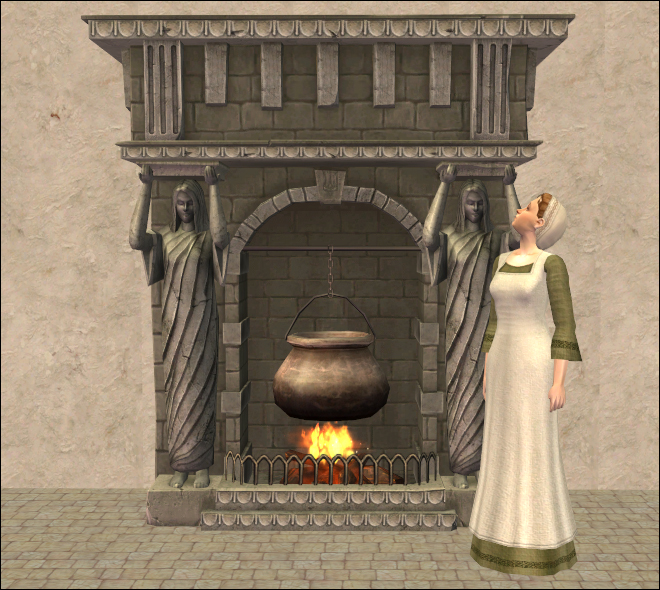 If you’ve played TSM you can tell that I’ve edited the mesh quite a bit; to keep the poly count out of “ouch!” territory (and because it would be inside the ceiling and you wouldn’t be able to see it anyway), I’ve removed the top part. I’ve also removed the dangly ladle thingies in front; they weren’t high poly in any way, but the textures were awful.

This fireplace stove comes in five of CuriousB’s ACYL colours + the TSM original. You can mix and match the statue-deco part and the brick part, just be aware that if you delete a recolour you delete it for both parts. 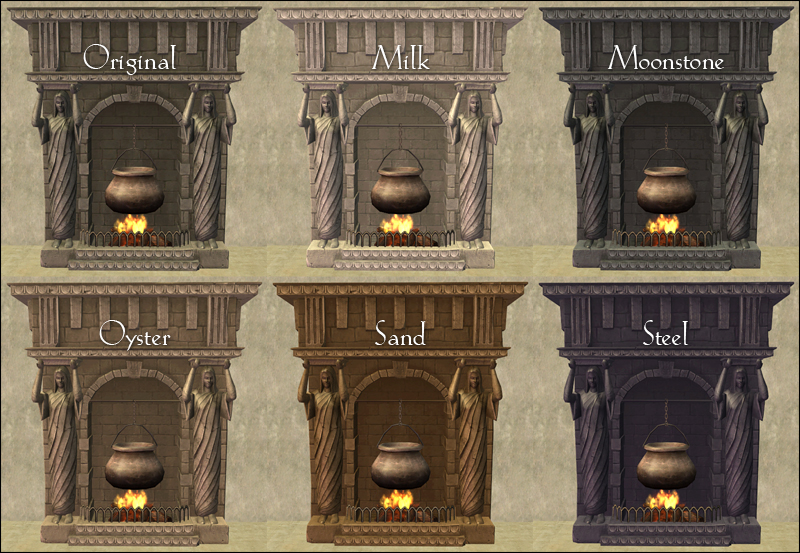 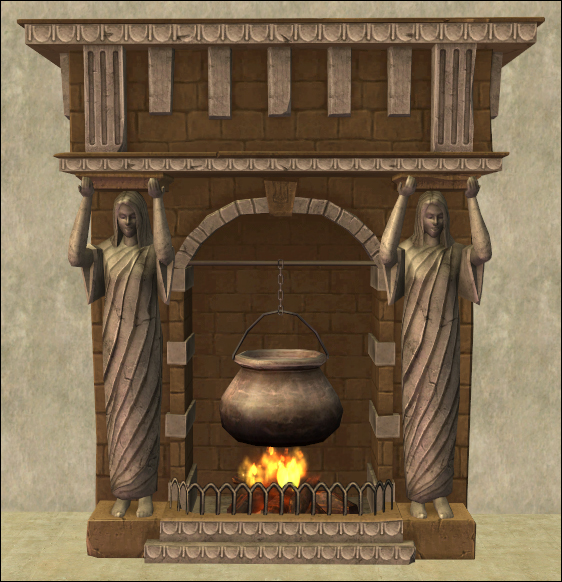 Now, since I keep calling these fireplace stoves, your Sims should be able to use them as fireplaces as well as well as stoves, right? Of course! When the stove isn’t being used, your Sims can warm themselves or poke the fire, increasing their comfort and fun. Just as with, you know, a fireplace. 😉 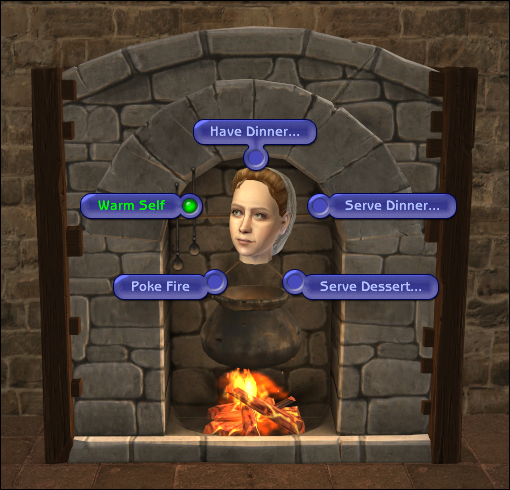 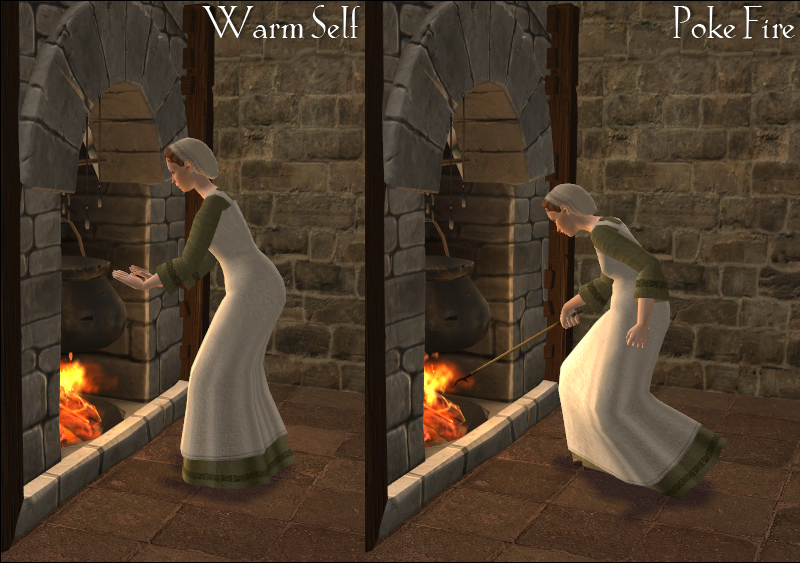 With that out of the way, it’s time for the technical bits. (You didn’t think we were done, did you? 😛 )

The fire in the fireplace will burn at all times – but don’t worry, it won’t spread, it’s not that kind of fire. (That doesn’t mean your Sims can’t still burn the house down if they don’t know how to cook, though.) When the stove isn’t in use the pot is empty, but as soon as someone starts cooking it will fill up with a steaming stew, just as in the title picture.

Also like in the title picture, when the Sim is cooking on the stove you won’t see the saucepan/frying pan. This is by design, to make it look as if the Sim is stirring the stew. They’ll still use a spatula when they’re frying something, though; I didn’t want to mess with that, even though stirring with a spatula looks a little silly. Also, the pan will reappear when the Sim has finished cooking the meal – I didn’t want to mess with that, either.

Then there’s the light. You know how real TS2 fireplaces spread this nice, warm, cozy light? I really, really wanted my fireplace stoves to do that as well, but whenever I tried to add a light to them my testing game crashed on startup (yeah, that’s bad), so I scrapped that idea pretty quickly.

But you know what they say. When all else fails… cheat. 😉

You’ll find the Invisible Fireplace Glow Lamp under Lighting -> Misc. and it costs all of $1. To place it, aim for the stove’s left side; that’s where the slot is, even though the lamp will duly appear in the middle of the fireplace: 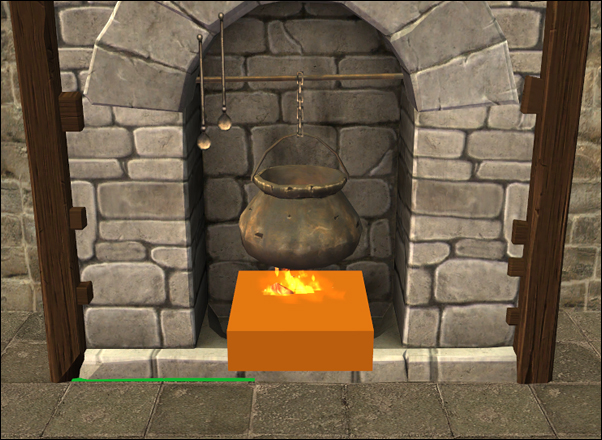 As you can see, I’ve made the mesh quite big; this is so you’ll be able to pick the lamp up and turn it on and off without accidentally getting the stove instead (but it won’t interfere with the Sims’ ability to reach the stove). Don’t worry, you can of course turn it invisible with the design tool if you so desire. Hence the name. 😛

Note: Depending on the time of day, sometimes when you’ve placed the lamp and have turned it on for the first time, you might need to pick it up and put it back down again to get the right glow.

Adding the lamp is completely optional, of course, but it really makes a world of difference when it comes to getting that cozy fireplacey feeling:

(BTW, if you’re cloning these fireplaces to make your own and want people to have the lamp for the glow, you’re welcome to include it with your upload. Don’t want your downloaders to be glow-deprived. 😉 )

All that’s left is for me to wish you Happy Holidays, and for you to: