Yes, I know the TSM clothes chests have been converted and made into functional dressers before, and I wasn’t going to do them at first… only the chests I’ve seen have all been static, and as you might have figured out by now, I have a thing for animated objects. So, I started to think about any chest-like objects in game whose animations I could use to make these into functional animated clothes chests – and realised there was one. So I did. 🙂

Like the Sim in the title pic, adults will behave like, well, adults, and be calm and collected when reaching for their clothes, but children will be a bit more enthusiastic about it: 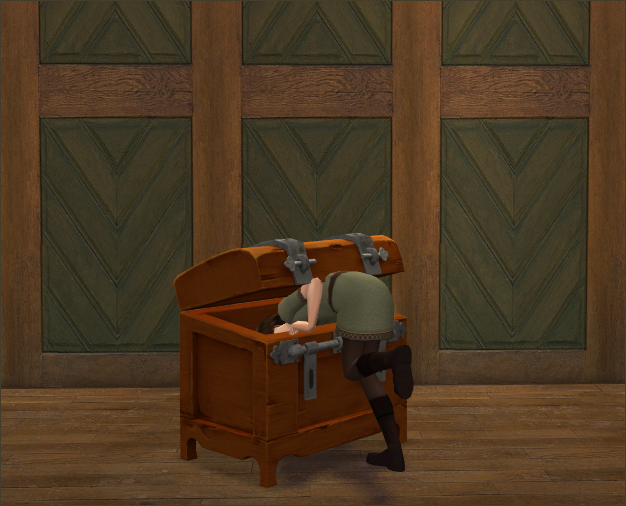 And by now you’ve probably guessed where I got the animations from. 😉 That’s right: the toy box! This means that I’ve had to scale the chests down some compared to the TSM originals so the anims would work properly, but I’ve tried to find a balance between making the anims look good and retaining the original TSM look.

The animations aren’t perfect, though. When an adult Sim reaches into the chest, their lower arm will clip some into the frame of the chest, as will a child Sim’s left hand (how much depends on how tall the chest is) – but then again you get this with the toy boxes as well, so I’m not feeling that bad about it. Also, when the Sim gets up, he will turn away from the chest for a moment, looking suspiciously like he’s holding something, before turning to face it again and doing the clothes-changing spinning animation. It happens quite quickly, though; you’ll probably only notice it because I told you about it. 😛

But enough about that. On to the chests!

The first one is the Barren Bolt Vestment Vault for $55:

Kara the maid is helping us with the size comparison today. The chest is shown in Volatile, but in your game the mesh
will be in Incendiary since I had a change of heart about the colour – after I’d finished taking the screenshots, of course.

I’m sure you know the drill by now: All of the chests come in Pooklet’s naturals + Time Bomb. Also, all the metal bands have four recols: CuriousB’s Custard (gold), Jet (black), Steel (iron) and Terracotta (copper). Well, except for when the original bands were black or grey – then I’ve skipped Jet/Steel. 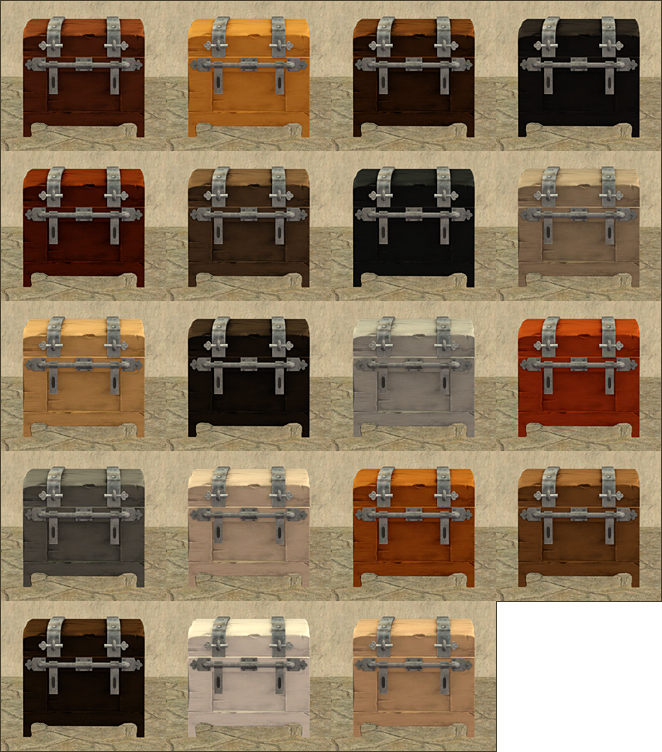 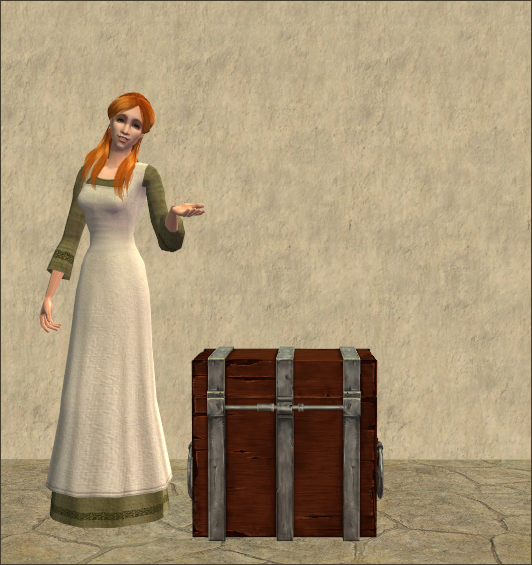 …the Cryptastic Wormwood Banded Chest for $150…

…and finally, the Seljaq-Ghazhadid Lacquered Chest for $210.

Since these are chests where you open the top, and not dressers where you need space to pull out drawers, the footprint is just one tile. This means that you can save space by placing it adjacent and perpendicular to a doorway without problems – even if your Sims of course still need a clear path to be able to reach into it.